Have you ever walked into your local drug store just to grab an allergy medicine and became instantly overwhelmed with all the choices in front of you? In this guide, we will hopefully simplify your options and give you a better idea of just what medication is the best choice for you.

​Histamine plays a central role in the allergic response and it's main purpose is not to simply cause the symptoms we hate so much (although it feels like that sometimes!). It's effects on the blood vessels in our body and in our airways is what usually causes the most grief. Histamine also has a major role in the release of stomach acid and the release of neurotransmitters in the brain.

There are numerous histamine receptors, but this article will focus on H1 receptors. All the antihistamine medications that are indicated for allergies are H1 antagonists or simply "antihistamines".

When released, histamine causes some of the following effects:

So we take antihistamines to negate the effects of histamine on the body. There are NUMEROUS antihistamines available for purchase. They are typically divided into generations, both first and second.

It is interesting to note that while the first generation antihistamines such as Benadryl (diphenhydramine) is known to cause sedation, it can actually stimulate some people, most often children.

The sedation side effect of the first generation antihistamines has led them to be marketed as sleep aids as well. Most over the counter sleep aids (Sominex, Nyquil) just contain sedating antihistamines.

The first generation, as mentioned before, is noted for it's quick onset of action, short duration of action, sedation and effectiveness for use in allergic reaction situations. There are actually many different classes within the first generation antihistamines (e.g. Ethanolamines, Piperazines etc) but we will just stick some the general relationship between all of them. We will note interesting comments and uses for the various drug in the chart and section below.

Here is a chart of common first generation antihistamines (There are a lot!) 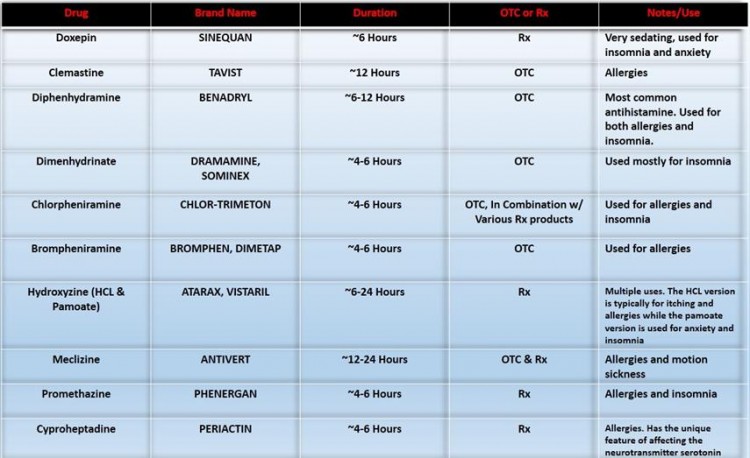 The second generation of antihistamines are noted for their long duration of action and their general lack of sedation. They are typically the best choice for all day allergy symptoms.

​Which Antihistamine Is The Best?

What Is Xyzal OTC?

OverviewXyzal (Levocetirizine) is an allergy medication that is available over the counter beginning Spring 2017. Xyzal was initially approved in 2007 by the FDA as a prescription only medication indi...
READ MORE