What's The Best Way To Take Fosamax (Alendronate) And Levothyroxine Together?

In our latest question and answer, the pharmacist discusses how to best take levothyroxine and Fosamax together. 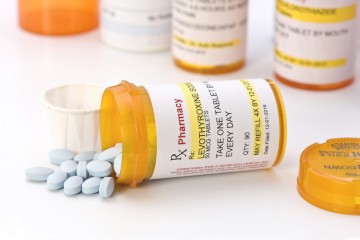 I take levothyroxine every morning. I take it 30 to 60 minutes before eating anything in the morning. I have now been put on alendronate once per week for osteoporosis. It is also supposed to be taken before eating or drinking anything. What is the best way to take these meds?

Thanks for reaching out to us!

This is a great question regarding a somewhat confusing situation in which two different medications, levothyroxine and Fosamax (alendronate), are recommended to be taken in the morning, by themselves, with no food or drink (aside from water).

Now, the reason why both of these drugs are recommended to be taken by themselves is that their absorption can significantly be decreased when taken with food or other drugs.

If either is less absorbed than usual, it could lead to them have a sub-clinical effect (i.e. they won't work as well). A too-low levothyroxine dose could result in low thyroid hormone levels while a too-low Fosamax (alendronate) dose may not improve bone density as effectively as it could.

So, what are you supposed to do if you have been prescribed both of these drugs and you need to take them on the same day? It can be challenging and cumbersome for sure, but it certainly is doable.

First and foremost, if your doctor has recommended you be taking these in a specific manner, be sure to follow their directions.

However, if they have not given you specific guidance, it makes sense for most individuals to take the Fosamax (alendronate) first, followed by levothyroxine at least 30 minutes later.

There are a few reasons why Fosamax (alendronate) should generally be given first, followed by levothyroxine at least 30 minutes later if you need to take them on the same day.

Firstly, the most commonly used form of Fosamax (alendronate) is a once-weekly dose. Since you are only taking it once a week, you want to make sure you are getting the full dose. If you take it with something else and it isn't absorbed as well, you are essentially underdosing yourself for an entire week.

Secondly, we know that levothyroxine decreases Fosamax (alendronate) absorption, but not vice-versa.

One study, which is referenced in the prescribing information for an effervescent form of alendronate (Binosto), reported that the AUC (a pharmacokinetic term describing drug concentrations in the blood over a period of time) and maximum concentration of alendronate were decreased by 7% and 9% respectively when taking with levothyroxine:

"...mean AUC and Cmax [maximum concentration] of alendronate decreased by 7% and 9%, respectively, when a single dose of BINOSTO (70 mg alendronate) and 600 mcg levothyroxine were given concomitantly to 29 healthy male and female subjects."

These small decreases certainly aren't huge, and the dose of levothyroxine given in this study was quite large, but the point is nevertheless there...that levothyroxine can decrease the total absorption of Fosamax (alendronate).

Focusing now on levothyroxine, there are a number of things we know that decrease the absorption of the drug.

Fosamax (alendronate) has never been specifically shown to decrease absorption of the levothyroxine if they are taken together, but it still may, which is why it makes to separate their administration. Add in the fact that doses of levothyroxine are so small (it's dosed in micrograms, which is 1/1000th of a milligram), we want to make sure nothing affects how much your body absorbs.

Taking levothyroxine 30 minutes after Fosamax (alendronate) should be enough time for both drugs to not have a negative effect on the another. You should then wait for another 30 to 60 minutes before eating breakfast.

If you are taking the weekly dose of Fosamax (alendronate), which is the most commonly used form, this shouldn't be too much of a challenge doing this since you will only run into this situation once a week.

If you are taking the daily dose of Fosamax (alendronate), which isn't often used but still may be prescribed to you, you may have to move some things around since I would imagine you don't want to go through this routine every morning.

One possible suggestion, in this case, would be to take Fosamax (alendronate) in the morning, but take levothyroxine at night, 3 to 4 hours after the last meal. This is an alternative method for taking levothyroxine as published in the Clinical Practice Guidelines for Hypothyroidism in Adults: Cosponsored by the American Association of Clinical Endocrinologists and the American Thyroid Association.

I hope this answer helps!

Be sure to reach out to us if you have any more questions!

Question At a glance Answer The Details 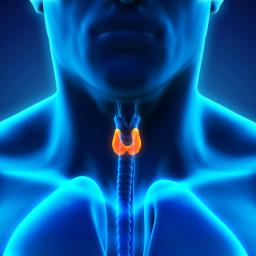 Do You Need To Taper Cytomel?

Do I have to scale up and down my Cytomel dosage for therapeutic reasons? Or do I just take my prescribed 25mcg a day? If no scaling up and down is necessary and I only take the 25mcg a day, do I have...
READ MORE 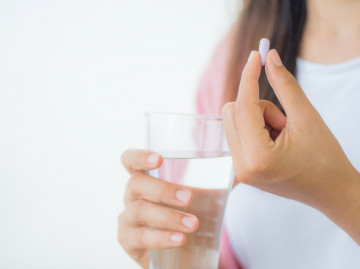 What Is The Best Way To Take Levothyroxine?