How Long Does Vyvanse Stay In Your System?

In our latest question and answer, the pharmacist discusses how long Vyvanse stays in your system and how long it is detectable on a urine drug test. 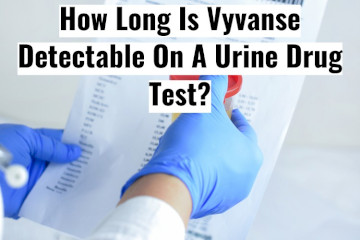 If you take 15mg of Vyvanse for two or three weeks and then stop taking it, will it be cleared from the body (urine) on the morning of the third day?

Vyvanse (Lisdexamfetamine) is an amphetamine medication used for the treatment of ADHD (attention deficit hyperactivity disorder).

It is a prodrug, meaning that is pharmacologically inactive on its own and needs to be metabolized within the body to the active drug, which in this case, is dextroamphetamine.[1]

Dextroamphetamine is an amphetamine that will show up in urine drug tests that are looking for 'amphetamine', which is most of them.

In fact, amphetamines are one of the five classes of drug that are looked for on 'standard five-panel' drug screenings.[2]

How long it will take your body to completely metabolize and eliminate Vyvanse (specifically, dextroamphetamine) will vary by individual.

Certain factors such, such as your age, kidney function and the acidity of your urine (more on this later), will influence elimination time.

A key characteristic in determining how long a given drug will stay in your system is its 'half-life'.

The half-life of a drug, in simple terms, is the length of time it takes to metabolize or eliminate 50% of it.[3]

So, as an example, consider a drug with a half-life of 8 hours. The following chart represents how much of the drug will be left in your system over time.

In general, it takes around five to six half-lives for a drug to be considered completely eliminated for your system, and be present in low enough concentrations that it won't produce a 'positive' test on urine drug screens (this will vary based on the specificity of the test, however).[4]

The prescribing information for Vyvanse lists the half-life dextroamphetamine (the active metabolite) as 12 hours:[5]

The mean plasma elimination half- life of dextroamphetamine was about 12 hours after oral administration of lisdexamfetamine dimesylate.

With an average half-life of 12 hours, we would expect for the drug to take around 60-72 hours (translating to five to six half-lives) for it to be completely eliminated from the body.

As mentioned, there are several factors aside from the known half-life of a drug that can influence how quickly it is eliminated from your system.

In terms of urinary pH, elimination of all amphetamines are known to be affected by how acidic or basic your urine is.

Amphetamines are basic (i.e. have a pH greater than 7), and without getting into the science of this, their urinary excretion decreases as the pH increases. In other words, if your urine is basic, it will take longer to eliminate.[6]

One study reported the following regarding amphetamine elimination and urine pH:

How Long Does Klonopin Stay In Your Urine?

Can you let me know how long Klonopin (clonazepam) stays in your urine?
READ MORE

How Long Is Valium (Diazepam) Detectable In Your System?

How’s long is Valium detectable in the system?
READ MORE

How Long Is Buprenorphine Detectable In Urine?

How long will buprenorphine stay in your urine if you are only taking half pills?
READ MORE
View more questions