Can You Take Expired Cipro (Ciprofloxacin)?

Our pharmacist answers the latest question regarding whether or not it is okay to take expired Cipro (Ciprofloxacin). 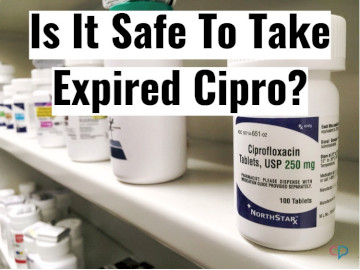 I have a bottle of cipro that is 3 years old....will Cipro tabs still be effective to treat diverticulitis?

The concern isn't necessarily that expired drugs will cause harm to you. In fact, most do not break-down into harmful components.

The big issue is that they may have lost potency over time and may not be as effective. This is of huge importance with antibiotic drugs like Cipro.

Taking Cipro which has lost potency may put you at risk of underdosing the treatment of your infection. This could lead to treatment failure, causing your infection to persist, and in some situations, make further treatment more difficult.

One of the main problems concerning expired drugs (like Cipro) is that it is nearly impossible to tell if they have lost potency over time. The physical dosage form (e.g. tablet) may look fine and be intact, but at a molecular level, there could be degradation.

To ensure you are taking a product that is safe, effective and retains the listed potency on the packaging, you should only take drugs that are 'in-date' (i.e. not past their expiration).

They are some exceptions to this, and there are even programs (such as the FDA Shelf-Life Extension Program) that stockpile expired medications for use in emergency situations.[1]

Overall though, if you have access to a non-expired drug (especially antibiotics), you should not be taking ones that are expired.

Expiration dates are mostly determined based on the manufacturer conducted clinical trials for a given drug. They test stability and potency over a finite period of time.[2]

Most commonly, expiration dates of 2 to 3 years from the date of manufacturing are used. While there certainly is a chance a given drug will be safe and effective for a long time after that, there is no data to support it.

Theoretically, drug companies could perform longer stability tests, but there really isn't any incentive to do so. Most drugs are used within a few years of manufacturing and the (relative) short dating assures the purchase of new drugs.

As an overall point, the expiration date listed for a particular drug product is the date up to which the manufacturer knows the drug still maintains its potency and safety as advertised.

After the expiration date, you just don't know whether or not a drug has lost potency or has reduced stability. Unfortunately, there really isn't a good way to tell either if either of these has occurred.

A small number of drugs do have tell-tale signs. For example, aspirin that has degraded has a distinct vinegar smell, since it partially breaks down into acetic acid.[3]

For the vast majority of drugs though, aside for specific testing (which isn't a reasonable thing to do), it is impossible to tell if they have degraded.

As discussed above, the concern with expired drugs is that they may have lost potency over time, and may not be as effective as they once were.

However, even though a drug likely won't degrade into harmful components, in a sense, expired drugs can be harmful if they aren't effectively treating what they are supposed to be treating.

There is an unlimited number of examples that could be used to support this.

What if you were taking a blood pressure medication that was no longer effective? Your risk of cardiovascular complications would increase.

What if you relied on insulin to control your blood sugar, but it had degraded to the point where it was ineffective? You would be putting yourself at risk for a myriad of complications.

Going back to antibiotics like Cipro, if they don't effectively treat your infection due to a loss in potency, your infection could get worse and make it more difficult to treat in the future.

Having said all of the above, it is important to point out that most drugs are relatively stable well past their listed expiration date.

Studies concerning expiration dating have led to several 'expiration-date extension' programs, where expired drugs can be used in times of emergency.

The Shelf Life Extension Program by the FDA is perhaps the most well known. It is described by the FDA as the following:

Stockpiling drugs, vaccines, and medical products is critical to ensure public health emergency preparedness for both the U.S. military and civilian populations. To avoid the need to replace entire stockpiles every few years at significant expense, and because it was recognized through testing that certain products remained stable beyond their labeled expiration dates when properly stored, the Shelf-Life Extension Program (SLEP) was established in 1986.

I mention programs like these to point out that many expired drugs do have utility and can still be potent to the point where they are effective well past their expiration date.

The problem though is that drugs in these programs are tested periodically to ensure stability (even when past expiration).

Testing the expired antibiotic prescription you got from your pharmacy likely isn't possible, and therefore, there is no way to tell if it is as effective as it once was.

Since you can't tell if your expired drug will be as safe and effective as it was when it was in-date, they aren't recommended to be taken. You should go to your doctor for a prescription for an 'in-date' product so you can be confident in its listed potency.

An important consideration that I haven't even discussed is that you should not be self-treating most infections anyway. Assuming you are wanting to use an old prescription you have for a new infection, this isn't a good idea.

There is a wide range of infectious organisms, and they are all susceptible to different antibiotics. There is a real chance that ciprofloxacin may not even be an effective treatment option for your specific infection.

Additionally, ciprofloxacin has a variety of precautions and contraindications that need to be accounted for on a patient to patient basis.

You should see your doctor for an appropriate diagnosis.

This is in continuation to my previous query which was answered by Dr. Hayden Gharibyar. Does Metronidazole have no effect on Klebsiella pneumoniae?I am wondering because the blood in the stool of...
READ MORE 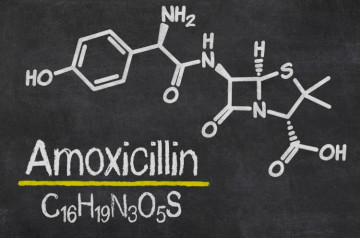 How To Reduce Nausea Caused By Amoxicillin

I have been taking Amoxicillin 125 mg tablets 2x/day for 5 days for an ear and sinus infection. Since the second day, my stomach has been hurting and has been worse each day. I have 3 more pills lef...
READ MORE

Can I take fluconazole if I have angina?
READ MORE
View more questions