Can You Cut Or Split Metformin ER In Half?

Can I Cut My Metformin ER Tablet In Half? They Are Very Large & I Am Having Trouble Swallowing Them?

All 3 formulations are available generically but they are not interchangeable as they all use different release mechanisms.

Glumetza ER uses a mechanism known as gastro-retentive technology (also known as 'Modified Release'). The tablets are designed to remain in the stomach and deliver metformin to the upper GI tract over an extended period of time. Like Glucophage XR, Glumetza ER can not be cut or split.

​Fortamet ER uses single-composition osmotic technology (SCOT). After taking a tablet by mouth, water is taken up through the tablet membrane, which dissolves the drug in the core. The drug then slowly exits through a small hole in the tablet. Medications that use this technology are typically visible in the stool as the actual tablet does not dissolve. Like the other metformin products, ​Fortamet ER can not be cut or split.​

After reviewing all of the different extended release formulations, we can see that unfortunately there are no metformin ER products that can be cut or split. If you cannot swallow the tablets, consider the immediate release or liquid formulation.

Splitting, cutting or the crushing of tablets (or ER capsules) with a controlled release mechanism, can cause what is known as “dose dumping,”. This can lead to a overdose and toxic effects of the drug. For this reason, Metformin ER formulations should not be altered.​​

Can Xanax (Alprazolam) Be Split?

I'm prescribed 60 .05mg alprazolam tablets every month. I get the orange oval ones, but they don't seem to work very well compared to half of an oval blue 1mg pill. Would it be possible to get 30 1mg...
READ MORE

Can You Split Bystolic?

Can you split Bystolic?
READ MORE 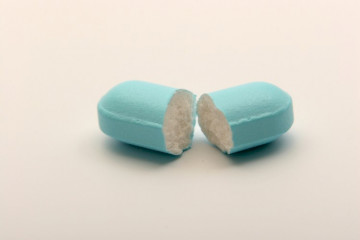 Can You Split Claritin?

Can you split the 10mg tablet of Claritin or even the 5mg?
READ MORE
View more questions