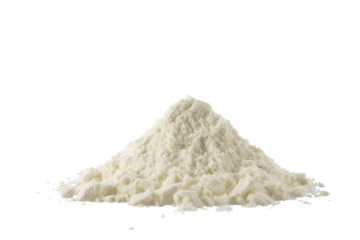 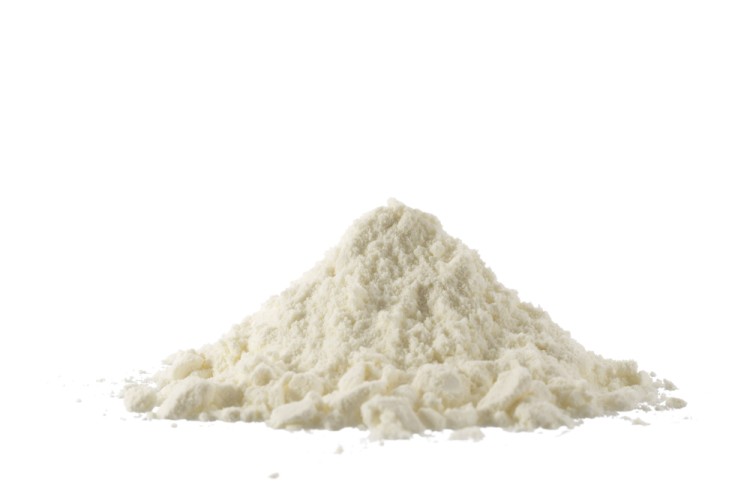 If you have ever taken the time to look at the ingredient list of a drug or over the counter dietary supplement, you may notice that lactose is commonly listed as an inactive ingredient.

It may seem like an odd choice for product manufacturers to utilize lactose, especially since the number of individuals dealing with lactose intolerance is quite high.

In fact, the National Library of Medicine reports that nearly 65 percent of the human population has an impaired ability to digest lactose. Incomplete digestion of lactose can create a slew of unpleasant side effects, including:

Before I get into the reasons as to why lactose is included as an inactive ingredient (also known as an excipient) in drug products, the next section contains a little more information on why lactose can cause so many problems with our GI tract.

What Is Lactose Intolerance? 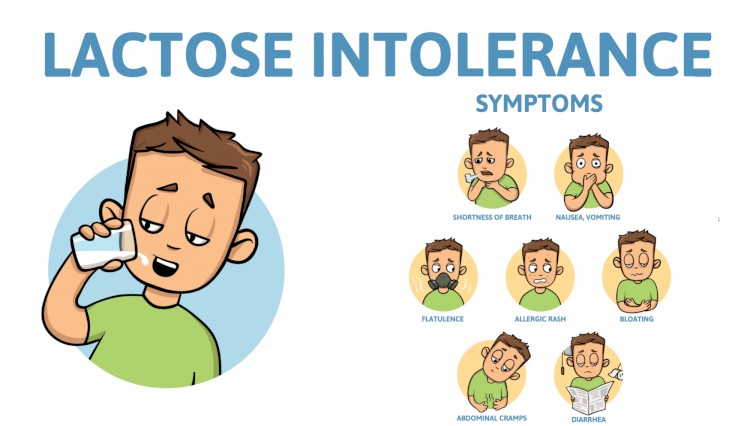 Lactose intolerance occurs due to a deficiency of the lactase enzyme.

Lactose is a disaccharide 'milk sugar', composed of two simple sugars, galactose, and glucose. Lactose is a relatively large molecule and is, therefore, not readily absorbed in the small intestine. Lactase is an enzyme that breaks down lactose into the two component sugars (glucose and galactose), which are absorbable.

When there is a deficiency of lactase, lactose is not entirely broken down and continues through the small intestine to the large intestine (also known as the colon).

Once undigested lactose enters in the large intestine, the gastrointestinal adverse effects we associate (e.g. gas, bloating, diarrhea) with lactose intolerance can occur. These bothersome symptoms arise for a variety of reasons, including: 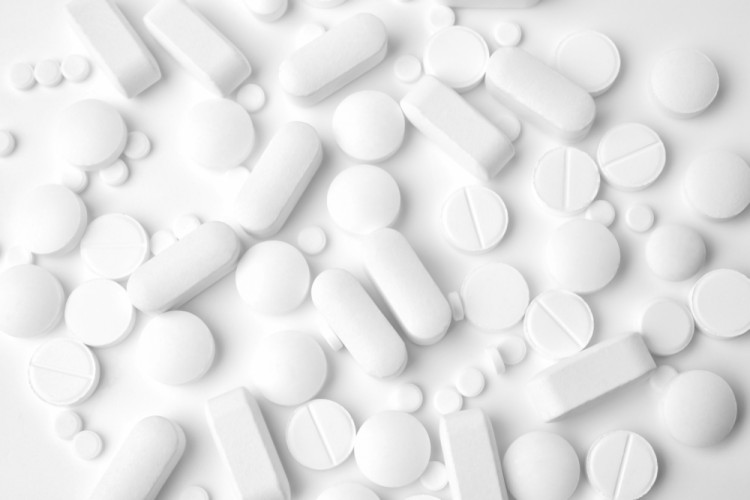 With all the issues that could come about from consuming lactose, it is natural to wonder why it is used in medications at all. Well, there are many reasons.

First and foremost, it is important to point out that the total amount of lactose used in any one drug product is low, and for the vast majority of individuals, its inclusion is unlikely to cause any problems, even in those with lactose intolerance.

Studies on the matter report generally that it takes the equivalent of one 8 to 12-ounce glass of milk (which equates to around 10 to 12 grams of lactose) to cause negative symptoms. That is far more lactose than what is contained in drug products.

Nevertheless, there are studies that report lesser amounts of lactose, as little as 3 grams, can cause adverse effects in those especially sensitive to it. However, 3 grams of lactose is still less than what you would find in any single drug product.

This isn't to say that everyone won't have problems with the small amount of lactose found in drugs as there have been case reports of individuals showing sensitivity to even the smallest amounts.

The author of one large study on lactose intolerance sums it up well:

"It is reported that patients with known lactose intolerance (LI) can generally ingest up to 12 g of lactose before reporting symptoms. However, individuals may have a far lower threshold and feel unwell after consuming only very small quantities of the sugar [lactose]"

Overall, it is safe to say that while most drugs and supplements won't generally contain enough lactose to trigger symptoms in those intolerant to it, the danger of a reaction depends greatly on the individual. If you are lactose intolerant, you should be aware of lactose in your medication, just in case.

Now, let's get into why lactose is used in drug manufacturing.

Why Lactose Is Used In Drug Manufacturing 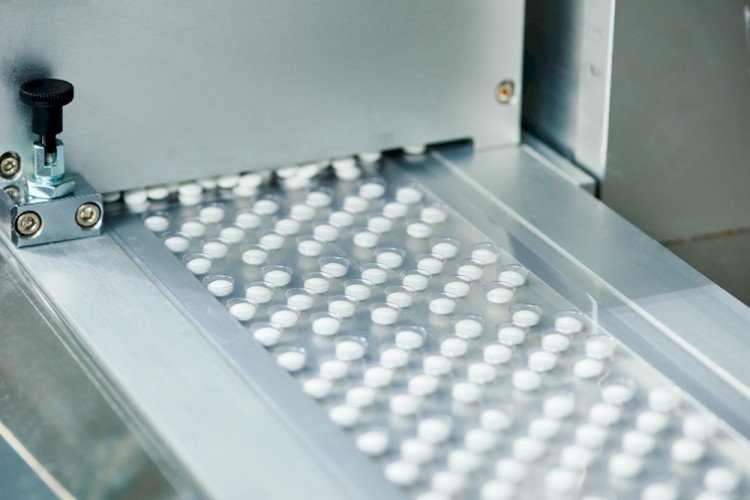 It is important to distinguish the difference between active and inactive ingredients, as defined by the FDA (Food and Drug Administration).

An active ingredient is defined as:

"...an active ingredient is any component of a drug product intended to furnish pharmacological activity or other direct effect in the diagnosis, cure, mitigation, treatment, or prevention of disease, or to affect the structure or any function of the body of humans or other animals."

While an inactive ingredient is defined as:

Lactose is classified by the FDA (Food and Drug Administration) as an 'inactive' ingredient in drug products and is listed in their database of approved inactive ingredients (there are actually several forms of lactose that are approved including anhydrous lactose and lactose monohydrate).

Since an 'active ingredient', per the FDA, is any component of a drug product that is intended to elicit some sort of pharmacological activity or effect in the body, inactive ingredients like lactose, therefore, are considered to be inert, and should not produce any appreciable effects on the body.

The definition doesn't take into account allergies or sensitivities however, like lactose intolerance. Clearly, if you have an allergy to an inactive ingredient, it will have a noticeable, and negative, effect.

As to why lactose is one the most commonly utilized inactive ingredients (or excipients), even though it can cause issues for some, there are many reasons. These reasons include:

Add in the fact that lactose is both inexpensive and readily available (preventing shortages), you can see why it is utilized in drug products as much as it is. 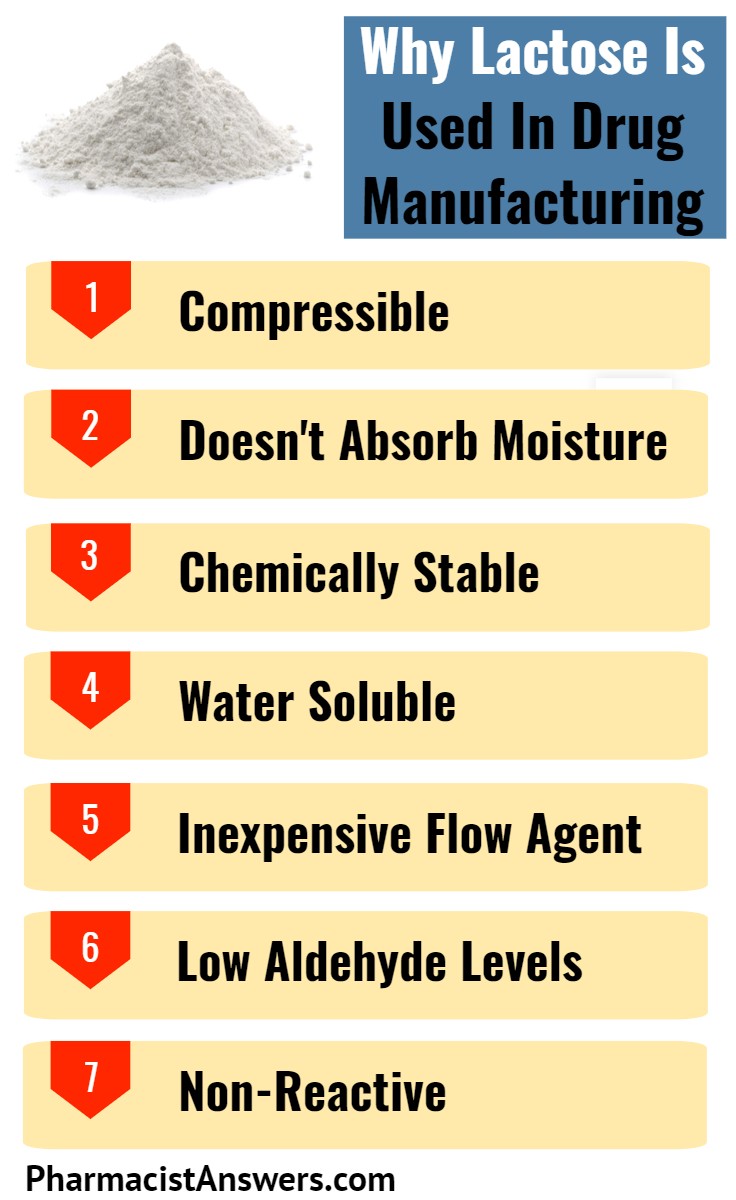 I discuss some of these attributes in more detail below:

Lactose molecules can be significantly compressed and are therefore ideal for use as a filler in the formation of tablets. It is important to consider excipients that won't significantly add bulk to a dosage form, to ease swallowing. Compressibility also helps to bind tablets together, preventing them from turning to powder or small pieces if cut or crushed.

Additionally, lactose has a bland, if non-existent, taste, increasing palatability for crushed and opened capsules.

Lactose absorbs very little moisture. Lactose monohydrate (a specific form of lactose) absorbs only about 0.2% water while anhydrous lactose (another form) absorbs only 1%. This adds stability to dosage forms like tablets and capsules.

Lactose Is Soluble In Water

Lactose is water soluble and therefore does not interfere significantly with drug dissolution and absorption.

Additionally, lactose does not interfere with drug dissolution tests, which use 'sinkers' to completely immerse a tablet or capsule in liquid for the purpose of measuring how fast they dissolve. Medications that 'float' cannot be accurately tested. Lactose does not affect 'sinkers'.

Lactose is chemically and physically stable. It is essentially non-reactive with most active drug ingredients.

Lactose has very low aldehyde levels. Aldehydes can be involved in 'cross-linking' reactions, especially in hard gelatin capsules, and can decrease the solubility of the dosage form, increasing dissolution times.

Since lactose is non-reactive with most active ingredients, it is used in dry powder inhalers to act as a bulking and carrying agent of fine particles of the active drug. 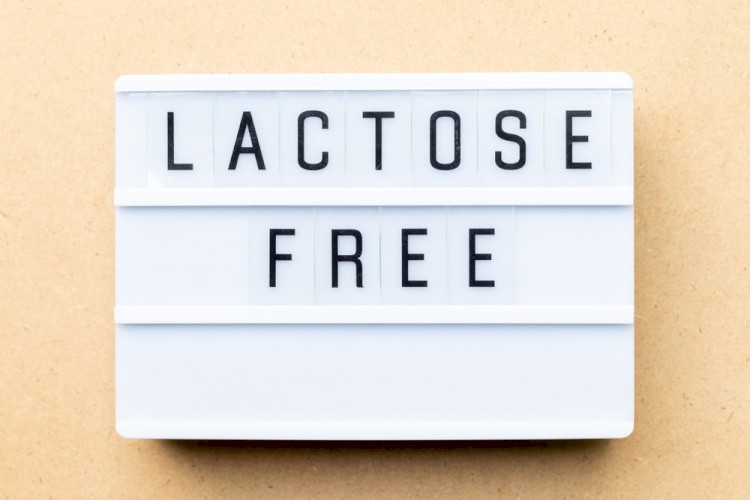 If you are lactose intolerant, most medications shouldn't contain enough to cause symptoms. Nevertheless, as discussed above, some people may be especially sensitive and it would be prudent to ask your pharmacist about lactose-free drug options.

Most generic drugs are produced by more than one manufacturer and your pharmacist can look into each specific product's inactive ingredient list to see whether or not they contain lactose. If there is a lactose-free option available, be sure to see if they can order it in.

If there are no commercially available lactose-free drugs that you have been prescribed, a compounding pharmacy may be able to make one for you.

If you have had no luck finding a lactose-free version of a drug that you need to take, you can ask your doctor for alternative treatment options or try some common methods to reduce the severity of lactose intolerance symptoms, such as:

We at PharmacistAnswers can help you find lactose-free drugs. Just visit our 'Ask The Pharmacist' page and we can hopefully find one that suits your needs! 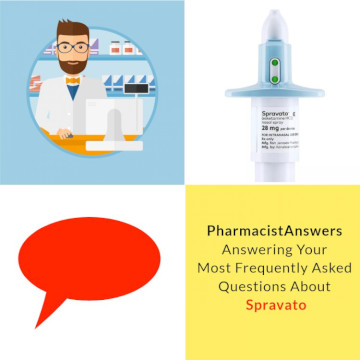 Since the FDA-approval of Spravato on March 5, 2019, we have received numerous questions about the drug from those suffering from depression who have not had success with conventional treatments. B...
READ MORE 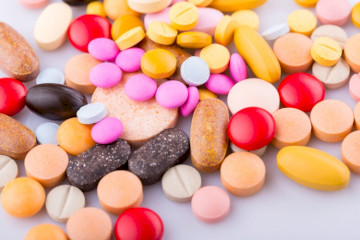 OverviewMost people would be surprised to learn that the effectiveness of many medications is hugely dependent on how exactly they are taken. It sometimes just isn't enough to take your medication at...
READ MORE 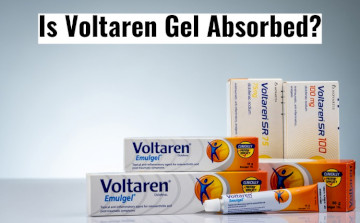